A call to Mark Cline this morning confirms he has staged yet another elaborate Roadside-style prank for April Fool’s Day near his home base of Natural Bridge, Virginia. 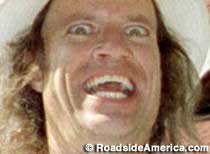 Cline crafts fiberglass creatures as one of his many jobs, and he’s installed five full-size elephants crossing a closed landfill that overlooks the city of Waynesboro. The lead elephant is being ridden by Hannibal — not the cannibal, but the ancient Carthaginian general who invaded Italy with similar pachyderm assistance. And this Hannibal happens to resemble Cline.

April Fool’s Day is often busy for Cline. He set up flying saucers around Lexington in 2001, dinosaurs in Glasgow in 2003 (later recycled into his Dinosaur Kingdom attraction), and Foamhenge in Natural Bridge in 2004 — which proved to be so popular that he’s kept it as a permanent attraction.

Cline said that Hannibal and the elephants will remain on the hill for 30 days “unless the city really insists on keeping them there,” and that they have no purpose other than to “put smiles on people’s faces and make ’em happy. That’s my job.”

Mark apologized that he couldn’t provide more details, but “I got to meet some TV people and I got a lady here from (off phone) where did you say you were from? Where? People Magazine? (back on phone) People Magazine. Sorry!”