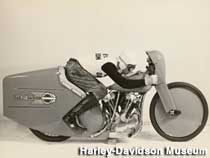 Considering the number of motorcycles on American highways — and the number of tips we receive from people carefully posing their motorcycles in their photos — it’s surprising that America has lagged in offering a really good motorcycle-themed attraction. That is, if you discount the occasional human skeleton on a motorcycle, or a motorcycle made of bones.

That void has now been filled by the $75 million, 130,000-sq-ft Harley-Davidson Museum, recently opened by the corporation in Milwaukee, Wisconsin. It’s so hip that tickets to visit have to be purchased in advance. It may not quite equal the product rapture and branding nirvana of the New World of Coca-Cola, but it comes close.

A Vietnam Memorial-style wall outside is studded with over-sized “rivets” onto which you can have inscribed personal messages — for $250. An interactive exhibit shows how a Harley engine works by crushing a Miller Lite beer can — Milwaukee’s other consumer icon. The sit-down restaurant serves its kebabs on real wheel spokes.

Some of the more noteworthy of the over 400 Harleys on display include models ridden by Elvis Presley and Evel Knievel, the oldest Harley in existence, and King Kong, a lumpy-looking two-engine model that took over 4000 hours to customize and stretches over 13 feet long.

After you max out on motorcycles, the museum also has small exhibits on the company’s bicycles, snowmobiles, boats, and golf carts.

Sections: Attraction News Comments Off on Born To Be Marketed: Harley-Davidson Museum Opens