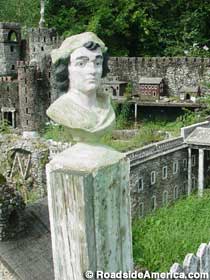 We tip our sun visor to the Kohler Foundation, which has reportedly purchased the abandoned Hartman Rock Garden in Springfield, Ohio, and plans to restore it to its former lumpy glory.

We last saw Hartman’s Rock Garden in 2004, and though overgrown with weeds, it was surprisingly elaborate and built up for a backyard Dreamer, in an older neighborhood of modest homes. The property was open for anyone to wander around and enjoy the miniature buildings and scenes.

For decades, the Kohler Foundation has been saving similar home-made conglomerations in Wisconsin, and it’s good to see them reach across state lines again. According to the Dayton Daily News, H.G. Hartman was a “textbook environment builder,” but we liked him because he made pebble tributes to Custer’s Last Stand and the Dionne Quintuplets.