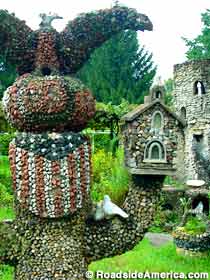 For an asking price of $57,900 — less than the cost of a high-end sedan or pickup truck — you could be the owner of H.G. “Ben” Hartman’s yard of miniature buildings and sometimes-enigmatic sculptures. The real estate page with the offer even features a nice photo of Ben’s mighty castle, and a tip of the hat to RoadsideAmerica.com.

According to the listing, the asking price not only includes the Garden and the Hartman house, but several surrounding lots as well. It’s a bargain, but it isn’t pain-free: the new owner will have some maintenance work on their hands, and will have to perform triage on some of Ben’s too-far-gone creations. But they can also keep this over-70-year-old folk art environment open to the public — and the extra land will allow new and more contemporary masterpieces to be built, perhaps miniature skyscrapers and moon bases.