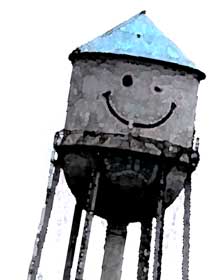 For years the city council in Grand Forks, North Dakota, has talked of tearing down “Smiley,” the city’s beloved baby blue water tower with dual-sided grins (and bow ties). The politicians have argued that Smiley is old and would cost hundreds of thousands of dollars to renovate. “The only reason Smiley… is still standing,” according to a report in the Grand Forks Herald, “is many people seem to like it.”

The people of Grand Forks are far from alone in their bond to a local cheery-faced water tank. There’s pride in knowing that the tallest thing in your town has a grin bigger than a bus.

Skyrocketing scrap metal prices, however, may tip the scales toward Smiley’s destruction, regardless of the expected public outcry — at least according to the Herald. First Daniel Boone’s nose, now Grand Forks’ smile? Is Smiley’s guileless grin valueless in troubled times? Can the water tank really be worth more as junk than as an attitude-elevator for an entire city?

The Herald offers one ray of sunshine: if Smiley’s supporters can prove its “historical significance,” then Smiley could qualify as an historic landmark. Even that may not restore Smiley — and, anyway, we like his weathered face — but it sure would make it harder to tear him down.