For five years the castle-like Kentucky Military History Museum — formerly the State Arsenal — has been open only sporadically. $2 million has been spent over that time to restore it to its fortress 1850 appearance, a looming presence on a hill overlooking the state capitol in Frankfort. 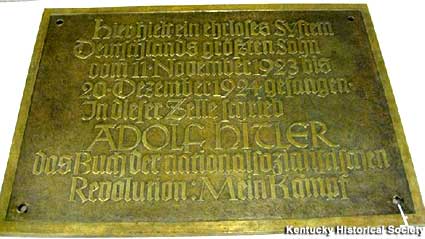 The building was finally opened on March 9, bringing artifacts back to the public that had been out of sight for too long. Most infamous is a metal plaque, yanked off a wall in Germany’s Landsberg prison, honoring its most celebrated inmate: Adolf Hitler. When Hitler came to power his former cell was made into a shrine, with the plaque bolted above the door.

According to Trevor Jones, director of museum collections and exhibitions for the Kentucky Historical Society, the plaque is in a Kentucky museum because the guy who took it was a colonel from Kentucky. “You can see the pry marks where they wrenched that thing off the wall; it must weigh 60 pounds,” said Trevor. 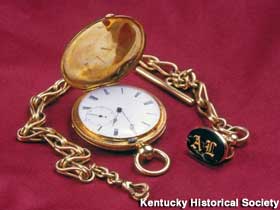 The plaque, he said, translates as follows: Here a dishonorable system imprisoned Germany’s greatest son from 11 November 1923 until 20 December 1924. In this cell, Adolf Hitler wrote the book of the National Socialist revolution: My Struggle.

Local heroes also feature prominently in the museum’s collection, although not always in ways that they would have liked. Confederate President Jefferson Davis’s shoes are displayed, as is the pocket watch carried by non-Confederate President Abraham Lincoln on the night he was assassinated (The Smithsonian claims to have all of Lincoln’s assassination artifacts, but they missed a few). 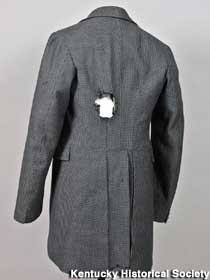 Most relevant to the building are the many death relics of William Goebel, who was shot outside the state capitol, sworn in as Kentucky’s governor the next day, and died two days after that (A plaque on the ground marks the spot where he fell). According to Trevor, the assassination — which happened in 1900 — was a political power struggle that immediately focused attention on the Arsenal building, where all the military equipment in Kentucky was stored.

“They buried land mines around the building to prevent a second Civil War,” said Trevor. The museum’s restoration had to take this into account, said Trevor, keeping someone on hand at all times “just in case we dug up something.” Nothing combustible was found, but the Kentucky Military History Museum is one attraction where you may definitely want to stay on the sidewalk and keep off the grass.