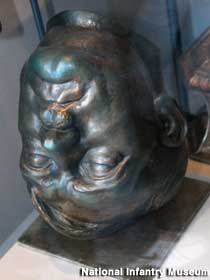 The National Infantry Museum has moved into a new, $100 million facility (complete with an IMAX theater) in Fort Benning, Georgia. The splashy highlight of the museum is its “Last 100 Yards” exhibit, where visitors can walk up a slope accompanied by attacking U.S. soldiers from the past 200 years.

We enjoy immersive fake combat as much as any American, but we were concerned with the fate of some of the exhibits from the old museum, which closed in 2008. Was the Hitler Head trash can considered too distasteful to make the move? How about the monument marking the grave of Calculator the Dog?

“The monument hasn’t been moved yet, but there is a plan to do that,” said Cyndy Cerbin, the museum’s director of communications. “We just have to raise a little bit more money.”

The less-bulky Hitler Head has been relocated — along with Hermann Goring’s diamond-encrusted field marshal baton — and both are featured attractions in the Spoils of War exhibit, which Cyndy agreed was “a favorite” in the museum. 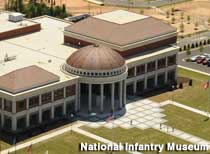 Another old exhibit, a captured portrait of Saddam Hussein that was set into the floor of the old museum so that visitors could walk on it, is currently in storage. It will likely never again be displayed with the same glee that it was in 2003. But the new museum, which is already being called the Smithsonian of the Army, does have the sleeping quarters of Gen. George Patton and Ulysses S. Grant’s liquor cabinet, so there’s still plenty to see here.

Sections: Attraction News Comments Off on Hitler Head Trash Can: Spoils for USA