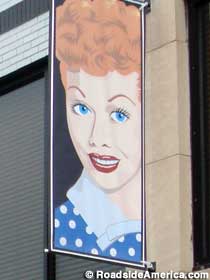 The Lucy-Desi Museum in Jamestown, New York, always had a problem. It was a storefront, too small to do justice to what it felt was America’s greatest entertainer and her less famous first husband. That’s Lucille Ball, who was born in Jamestown, and Desi Arnaz.

Granted, the museum was in an historically significant storefront — the building where Lucy reportedly bought her first hair dye — but, still. The museum didn’t even have the room to consistently display its most famous artifact: a hairbrush that still held strands of Lucy’s red hair.

That has changed as of this weekend. A New Lucy-Desi Museum has opened, three blocks west of the old downtown location, in conjunction with Jamestown’s annual Lucy Birthday Celebration (she would have been 97). This building not only has room to display the hairbrush, it has square footage to permanently display Lucy’s gold 1972 Mercedes-Benz. And as a treat to visitors on opening day, the museum has brought in Frank Gorey, Lucy’s chauffeur, to pose with fans in the car for souvenir photos.

One Response to “Hometown Space for Lucy”