Hootie And The Blowfish, Immortal

Flashback to the mid-1990s. Grunge music was in the air, unsettling the young. America needed a soothing aural balm, and a band out of Columbia, South Carolina provided it. Hootie and the Blowfish, with a memorable name, a lead singer who sounded a little like Eddie Vedder (but whose name wasn’t Hootie), churned out easy pop and sold millions of CDs. 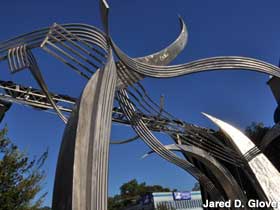 Now, 15 years later, Columbia has offered its thanks to the band by erecting a monument in its honor.

The idea reportedly began as a simple historical plaque to be placed at Five Points, the Columbia intersection (and cluster of bars) where Hootie and the Blowfish got its start. The plaque was rejected as uncool. What eventually replaced it was an abstract metal sculpture standing 17 feet tall, 20 feet long, and 10 feet wide. Music staffs appear to erupt out of the ground and wiggle through the air, forming a kind of gazebo. Directly underneath it, a large granite guitar pick is mortared into the sidewalk, engraved with the band’s history and its various awards. Read into the whole monument whatever you like.

There’s certainly room for debate as to whether or not Hootie and the Blowfish deserve a monument. But there’s no denying that it shows a shift in civic thinking, and that we’ve moved beyond the invisible, or at best rather sad, tributes to the rockin’ stars who came before.

Monument to Hootie and the Blowfish

Santee Ave., Columbia, SC
Directions:
Southeast side of the city, at the Five Points intersection. Five blocks south of US 378/Gervais St., on the southwest corner of Harden St. and Santee Ave.

More on Monument to Hootie and the Blowfish

One Response to “Hootie And The Blowfish, Immortal”