Old Baldy, hero horse of the Union Army, survived bullets in the belly and shrapnel in the nose on the battlefields of the Civil War. 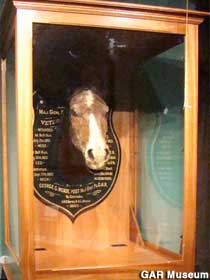 Now his head, the only part of him that’s left, has survived the courts of Pennsylvania. After a long hard tussle, the prized head is finally back on public view in its original home, the Grand Army of the Republic Museum in Philadelphia.

The conflict began decades ago, according to Hugh Boyle, the museum’s executive director. Old Baldy’s head was loaned to Philadelphia’s Civil War Museum in the early 1980s, while the GAR Museum was renovated. When the repairs were complete, the GAR Museum asked for Old Baldy back. The Civil War Museum refused, and kept refusing all the way until 2008, when it closed. But it still held onto the head.

The GAR Museum argued that the Civil War Museum was not living up to its original agreement, which stated that the head had to be displayed. When the Civil War Museum hinted that it would ship the mothballed Old Baldy out of state to be displayed elsewhere, the GAR Museum got a court order forbidding the head from leaving the city of Philadelphia. 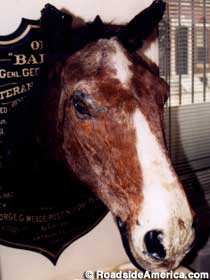 “It could not leave the city, it had no place to go, it was being stored in a secret place that was going to close,” Hugh said. “The court had no option but to give Old Baldy back to its original owner.”

The GAR Museum was thrilled to get Old Baldy back, celebrating the head’s return with a reception, a ribbon cutting ceremony, and champagne. Hugh said that the museum’s fondness for Old Baldy has only deepened over the years, and that it’s invested in a state-of-the-art case for the head, with anti-UV glass, climate control, and a dedicated room with related displays and blacked-out windows.

Grand Army of the Republic Museum and Library

4278 Griscom St., Philadelphia, PA
Directions:
In the northeast Frankfort part of the city, in the Grand Army of the Republic Museum and Library. I-95 exit 25. Drive west on Allegheny Ave. for about a mile, then turn right onto Frankford Ave. Drive north for a little over 1.5 miles. When the elevated rail lines come over the street, turn left at the second stoplight onto Church St. Drive one block and turn left onto Griscom St. The Museum will be at the end of the block, on the right, in the tall brick house.
Hours:
Tu 12-4 pm, 1st Sun of month 12-5 pm. (Call to verify) Local health policies may affect hours and access.
Phone:
215-289-6484
RA Rates:
Worth a Detour