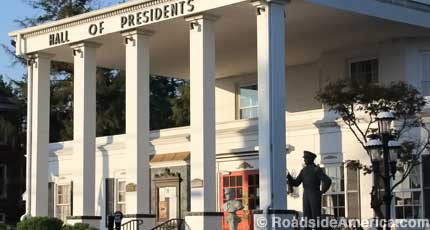 Does the price an American pays for a wax President reveal how Americans feel about the Presidents themselves?

Nah… but the recent Gettysburg auction of all the dummies from The Hall of Presidents and First Ladies was too good an opportunity for the media to pass up. Who are we to turn up our noses at such a ready-made story?

Randy Dickensheets, the auctioneer, forwarded us a list of the winning bids for all of the Presidents and First Ladies. The auction, he said, was packed with about 300 eager buyers, many of them attorneys and doctors looking to add a Mr. or Mrs. President as an office decoration. Also present were some distant presidential relatives, as well as the usual pop culture junkies and political packrats.

Priciest of all the wax Presidents were Abe Lincoln $9,350; Teddy Roosevelt $8,800; Ulysses S. Grant $6,820; George Washington $5,610; Andrew Jackson $5,610. Grant clearly benefited from being a Gettysburg favorite. Jackson’s strong showing was a surprise, placing him ahead of more modern presidential heartthrobs such as JFK and Ronald Reagan. Our personal favorite President dummy in the entire collection, Zombie Bill Clinton, fetched only $2,750. 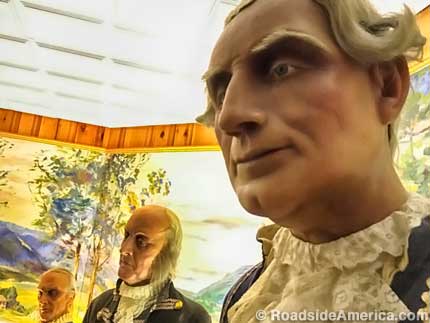 First among the First Ladies was the obscure – and evidently rare – Jane Irwin Findlay, who served as White House hostess during the 32-day administration of William Henry Harrison. Rounding out the top five: Mary Todd Lincoln, Grace Coolidge, Hillary Clinton, and Eleanor Roosevelt.

Randy told us that all of the dummies went to what he felt were “good homes,” except perhaps Hillary. “I thought the guy bid high ($742.50) because he really liked her,” Randy told us, but he later overheard that the winner planned to turn her into a toilet paper holder for his bathroom. “We’re a split country,” Randy said with a sigh.

Other notable items from the auction included a “large amount” of old black and white postcards “including five different styles of Abraham Lincoln” ($385); and – clearly the steal of the day – the audio tapes that narrated the entire attraction for a mere $38.50.

“This is your heritage!” the announcer cries, now for an audience of one. “The story of the Presidents as they might have told it! The story of America!” 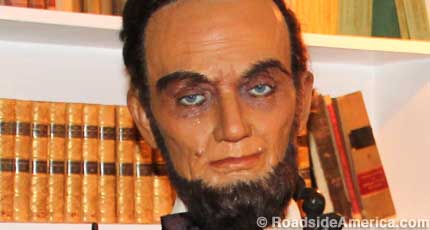 Hall of Presidents and First Ladies

Directions:
South of town, stay to left past US Hwy 15 split, on right, across from the Gettysburg Tour Center.
Hours:
Nov. 27: 2016: Closed permanently.
Status:
Closed