Illinois: Hands Off Our Leg 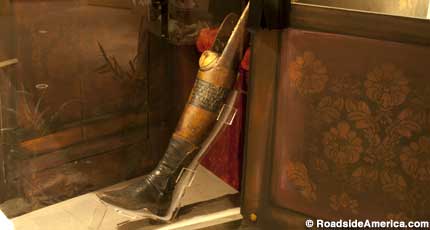 Every few years someone makes the news by trying to take away Santa Anna’s leg.

Santa Anna was the Mexican general best known for killing everyone inside the Alamo. His wooden leg was later captured by soldiers from Illinois, and it’s remained there ever since, despite the efforts of various outsiders to get the state to give it up.

The latest attempt was orchestrated by a Texas history professor, who in October 2016 reportedly traveled to Illinois with “dozens” of students — and a film crew — to demand that a referendum be placed on the Illinois ballot so that its citizens could vote to send the leg to Mexico, which is where the professor said it belongs.

This prompted a newspaper in San Antonio to write that the professor’s idea was terrible, and that the leg should instead be sent to San Antonio, where it could be displayed inside the Alamo.

The Illinois caretakers of the leg instantly rejected both ideas, as they have all previous ideas that would move the leg somewhere other than Illinois. The leg, they said, is in Illinois because its soldiers grabbed it, and Illinois is where it will stay.

Sections: Attraction News Comments Off on Illinois: Hands Off Our Leg