For an 80-year-old cartoon character, Popeye has some sea legs. At least three towns promote his immortality with statues, but Chester, Illinois, clearly has wind in its sails.

Crystal City, Texas, “Spinach Capital of the World,” was the first to erect a Popeye statue in 1937. It deserves credit for that — but it hasn’t done anything since. Alma, Arkansas, headquarters of Popeye Brand Spinach, put up a home-made statue some years ago and briefly took the lead in 2007 when it erected an impressive Popeye fountain. 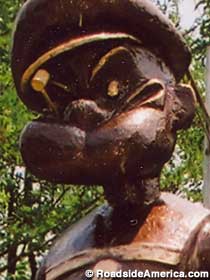 But those efforts shrivel like a wilting spinach leaf in comparison to the long-term project underway in Chester, which was the birthplace of Popeye creator Elzie Seegar. Chester has had a bronze statue of Popeye since 1977, but now it’s erecting full-size statues of all of Popeye’s characters — made of eternal granite, not fiberglass community art atrocities or inflatable frauds — and placing them around the town. Wimpy joined Popeye in 2006; Olive Oyl, Swee’pea, and Eugene the Jeep in 2007; Bluto in 2008. This year’s statue, unveiled September 12 at Chester’s annual Popeye Picnic, honors Castor Oyl and Bernice the Whiffle Hen.

Like a TV series that airs for too long, Popeye introduced new characters to keep it interesting (Popeye was himself a new character in the comic strip Thimble Theater, which he quickly overshadowed — like Happy Days and the Fonz). Chester intends to enshrine an impressive roster of 21 Popeye characters in a series of 16 statues, the last to be erected by 2020.

That may seem like a long time, but it’ll be worth it when future civilizations identify Chester as our Mt. Olympus, and Poopdeck Pappy and Alice the Goon as our gods.

Hwy 51, Chester, IL
Directions:
On the east side of Bridge Bypass Rd (Hwy 51 in Missouri) just north of the Mississippi River bridge.
RA Rates:
Worth a Detour

More on Statue of Popeye

One Response to “Illinois Popeye Pummels The Competition”