In Tough Times, Sin is In

Las Vegas tourism has taken a big hit in these recessionary times, with a drop in self-destructive free-spending visitors, plunging hotel room rates, and shorter lines at the all-you-can-eat Stone Crab Claw buffets. Fewer people are tossing the rent money down on a sucker bet at the craps table, and that means lost jobs and a dire economic outlook for suffering Sin City. 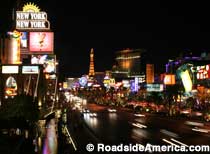 Vegas political mucky mucks, public relations honchos, and advertising professionals are responding to the crisis with a strategy of the promotional tried-and-true—and by that we mean bikinis and gangsters!

On May 14th Vegas set a new record for the “World’s Largest Bikini Parade”. Ogling onlookers took in the sight of 300 women in skimpy swimsuits parading their wonderful wares through the Fashion Show Mall, riding down the escalator in push-ups and pumps, and strutting their stuff along a full block of the Strip. Not a very long parade, but a memorable one.

Then there’s the pet project of colorful Las Vegas mayor, Oscar Goodman: The Mob Museum. Its “official institutional name” is the serious sounding “The Las Vegas Museum of Organized Crime and Law Enforcement” and its boosters swear up, down, and all around that the museum will not “glorify” the mob. (Still, Goodman regularly provides lighthearted judgment-free quotes such as “Anyone who says this should be an art museum should go jump in the lake, with concrete shoes on!”)

The edifice has a bankroll of  50 million dollars; $15 million has been raised so far, with over $7 million of that in federal, state and local grants. The shady destination will be located in a downtown building that previously housed a post office and… a courthouse!

Vegas’ reinvigorated sin-centric approach to tourism is likely to be “a hit.” After all, “What Happens in Vegas, Stays Here” was the city’s most successful slogan ever. Who even remembers far more lackluster “Your Vegas is Showing” of 2007, or “Vegas Right Now” of 2008? Those sad slogans deservedly sleep with the fishes. [Post by Anne D. Bernstein]

One Response to “In Tough Times, Sin is In”