Inside the Temple of Tolerance House 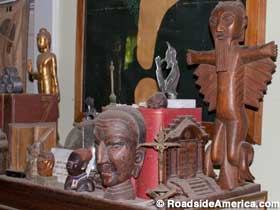 If you’re visiting the Temple of Tolerance in Wapakoneta, Ohio, and temple master Jim Bowsher is around, ask politely if you can go inside his house.

What you’ll find, in Jim’s words, are “a lot of stuff about man’s inhumanity to man” — the opposite of the Temple of Tolerance in the back yard.

Jim uses items from this extensive collection as visual aids for the motivational lectures he gives at juvenile detention centers and adult prisons. They include artifacts from the Klan and the Holocaust; a human skull given to him by a lawyer from an unsolved murder case; another human skull from a guy who drove around to mental hospitals in Ohio, performing lobotomies with an ice pick; and a crucifix that was held in the hand of a prisoner as he was executed in an electric chair. 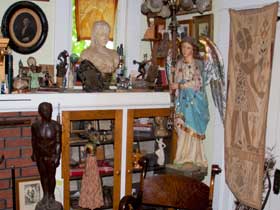 “There’s a million stories here,” said Jim. He told us that he’d been wooed by Hollywood for a reality TV series, but turned it down when he realized that the producers were more interested in the artifacts than in Jim’s motivational lessons. “When they got down to the enlightenment part, they were editing it out!”

One object that caught our attention was a battered-looking hood ornament. Jim said that it came from a race car powered by the cursed engine of the car in which James Dean had crashed and died. After the crash, said Jim, a doctor purchased the Porsche’s engine and installed it under the hood of his own race car, topped by the hood ornament. “Everybody warned him that the engine was haunted and he shouldn’t do it,” said Jim, “and in the first race he crashed and died.”

Sections: Places Comments Off on Inside the Temple of Tolerance House

The Temple of Tolerance

203 S. Wood St., Wapakoneta, OH
Directions:
I-75 exit 111. Drive west on Bellefontaine St. for around a mile, then turn right onto Wood St. The house will be halfway up the block, on the left.
Hours:
Open daily; just walk up Jim's driveway and into his back yard. (Call to verify) Local health policies may affect hours and access.
Phone:
419-738-4474
RA Rates:
Worth a Detour

More on The Temple of Tolerance