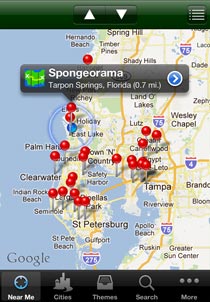 Just released: the latest update to the Roadside America App for iPhone, v1.5. We thought this would be a nice holiday bonus for iPhone users. Major improvements include the addition of Canada attractions, the reworking of where maps appear, and the end of “subscriptions.”

We also performed a number of fixes and tweaks, such as pull-to-refresh a list, and metric support for devices set to metric.

See some 1.5 screen views. More about the App: RoadsideAmerica.com/mobile/

Roadside America 1.5 for iPhone is available on the App Store.