Kentucky Rushmore, Just One Of The Kentucky Wonders 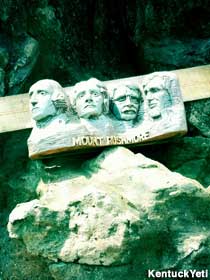 Will Russell has a dream. Well, actually, he has several dreams — and none of them are normal.

For ten years Will has successfully organized Lebowski Fest for fans of the film The Big Lebowski. He obviously has the skills to make odd dreams come true. That’s why no one discounts his ability to transform his latest fever-vision into reality: an attraction named Kentucky Wonders with its “crown jewel” — a replica of South Dakota‘s Mount Rushmore named Kentucky Rushmore.

Kentucky Rushmore will have the faces of four Kentucky icons, 40 to 60 feet tall. The list of potential honorees includes Abraham Lincoln, Colonel Sanders, wonder horse Secretariat, and Jim “Ernest” Varney — but Will hasn’t quite decided yet. Those who fail to make The Final Four, said Will, could be enshrined in an easy-to-visit “Crypt of Immortals” deep within the hollow mountain.

Will says he’s wanted to own a roadside attraction since visiting the Mystery Hole in West Virginia as a teenager. He was also inspired by the Roadside America mobile app (“It changed my life.”) and by RoadsideAmerica.com’s reluctance to add The Beerwolf — displayed at Will’s WHY Louisville gift shop — to its list of attractions. “My hope is that Kentucky Rushmore will qualify.”

Kentucky Rushmore already has a sculptor, Forest Boone, a seventh-generation nephew of Daniel Boone (another potential candidate for enshrinement). “He told me,” said Will, “‘I can do it in styrofoam and spray concrete over it. That’s quick and cheap but it’s gonna look like a putt putt sculpture.’ And I said, ‘Dude, there’s gonna be a lot of putt putt on this land.'”

Indeed, Kentucky Rushmore is just the first of many marvels that Will intends to build on 21 acres in Cave City, an old-time tourist destination that he calls his “favorite place in the world.”

“It’s gonna be a wonderland. That’s why it’ll be called Kentucky Wonders,” said Will. The lineup of attractions would include an “Ewok Dance Village” complete with a fire pit, DJ booth, and disco ball; a museum of Kentucky creatures such as the Hillbilly Sasquatch and Pope Lick Goat Man; and a putt putt golf course themed around the Seven Deadly Sins.

“Most things on the property will claim to be visible from space,” Will said.

If Will’s plans run according to schedule, he’ll break ground on Kentucky Rushmore in November 2011 and have it completed soon after — an amazing feat considering that Will only had the idea on June 25. “The grand vision ultimately is to have a sea of amusements,” said Will.

But can he really make it happen so fast?

3 Responses to “Kentucky Rushmore, Just One Of The Kentucky Wonders”