Sweating to the Oldies (the World’s Largest Ten Commandments) 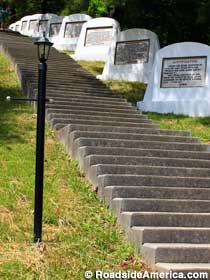 America would be in far better shape if everyone visited the World’s Largest Ten Commandments in North Carolina. Not explicitly from its religious inspiration, but from all the stairs you have to climb.

Although not accepted as a test of faith, climbing the steps of Prayer Mountain and Ten Commandments Mountain at The Fields of the Wood park may qualify as a spiritual challenge. Ascending to the altar — the World’s Largest — atop Prayer Mountain requires a climb of 321 steps; hiking up to the big Bible atop Ten Commandments Mountain takes 358 — plus an additional 20 or so to reach the observation deck atop the big Good Book. That’s roughly equal to walking to the top of a 22-story building. When was the last time you did that?

The unshaded staircase up the center of the World’s Largest Ten Commandments is cardio penance. All the tourists that we saw on our visit did exactly what we did: look up the hillside in dismay, then get in their cars and drive up an adjoining access road to the summit. There should be a commandment admonishing those who always take the easy path, but since there isn’t, no problem…

From there one can still clamber 30 feet up to the top of the world’s largest Bible, but even that can wind you on a warm summer day. 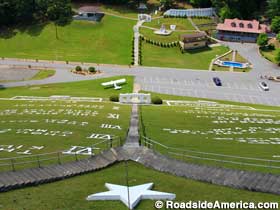 The view from the top is rewarding: the brilliant blue baptismal pool hundreds of feet below, the replica Golgotha and Empty Tomb, the hedges trimmed to read “Jesus Died For Our Sins,” the tourists in the parking lot looking in dismay at the steps up.

Even those with the most extreme climbing allergies have to do at least a little at The Field of the Woods, partway up Prayer Mountain to get a decent perspective of the World’s Largest Ten Commandments. The visit is an inescapable workout. Your soul may be golden, but your legs will feel like lead.

Sections: Places Comments Off on Sweating to the Oldies (the World’s Largest Ten Commandments)

The Fields Of The Wood

10000 Hwy 294, Murphy, NC
Directions:
In the southwest corner of the state. Part of The Fields Of The Wood complex, which is on Hwy 294, ten miles northwest of Hwy 64/129 and about six miles east of the TN/NC state line.
Hours:
Gated after hours. (Call to verify) Local health policies may affect hours and access.
Phone:
828-494-7855
RA Rates:
Major Fun