Las Vegas Gets A Third Walk Of Fame 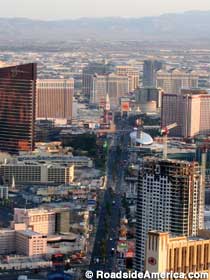 If you measure the celebrity rank of a city by the number of walks of fame that it possesses, then Las Vegas is the most famous burg on earth.

The best known of its concrete tributes is the Las Vegas Walk of Stars, which honors people that you’d expect, such as Wayne Newton and Liberace.

Next, and with in fact more honorees than the Walk of Stars, is the Legends of Erotica Hall of Fame, where body parts of people who often go by only one name are impressed into cement slabs that line the walls of Showgirl Video.

Now Las Vegas has a third shrine to celebrity-hood, Legends of Las Vegas.

This new one, according to a story in the Las Vegas Review-Journal, honors the “movers and shakers” of Sin City. The current mayor is its first, and thus far only, honoree. And it’s located on a sidewalk in a part of the city filled with vacant storefronts and strip clubs. In fact, the Legends of Erotica Hall of Fame is just up the street.

We admire the pluck of a city that puts a walk of fame honoring people you probably don’t know in a place where you probably don’t want to walk. Its future inductees are unknown to us, but we hope that they include the Las Vegas visionaries who turned the Berlin Wall into a urinal and who invented the drive-thru wedding chapel.

Sections: Attraction News Comments Off on Las Vegas Gets A Third Walk Of Fame