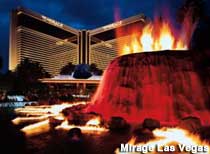 A stumpy volcano, set inside a three-acre artificial lagoon, has belched water and flame in front of the Las Vegas Mirage Hotel every night since 1989. It’s credited with starting The Strip’s renaissance — as that word is understood in Las Vegas — leading to ever-greater outdoor replica extravaganzas like the Luxor Pyramid and Sphinx and the half-size Eiffel Tower and the one-third scale New York City skyline. It was so successful, in fact, that it’s been turned off for the past ten months and no one has really missed it.

But now the volcano is back, after a $25 million upgrade that’s even more elaborate than the one that it underwent in 1996. The original volcano blew up mostly with water lit to look like flame, and did so every 15 minutes. 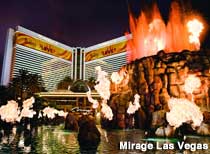 This newest version erupts only once every hour — from dusk until 11 PM — but it now has water plus 120 flamethrowers. The eruption is computer-synced to a score played by an Indian tabla musician and the ex-drummer from the Grateful Dead. “Daisy,” a giant torch bomb mounted at the volcano’s peak, explodes at the crescendo of the 4.5-minute show, reportedly providing a welcome blast of heat to audiences on chilly desert evenings.

We welcome this artificial hell-howitzer back into the American itinerary. Unlike the real thing, it won’t inflict dreadful curses, and it won’t kill Bigfoot.

3400 Las Vegas Blvd. S., Las Vegas, NV
Directions:
On the west side of The Strip, in front of the Mirage Hotel, across the street from the Venetian Hotel.
Hours:
Su-Th 8 and 9 PM; F-Sa 8, 9, 10 PM Local health policies may affect hours and access.
Admission:
Free
RA Rates:
Worth a Detour