It was a sad day in 2006 when The Leather Guy came down. He was a roadside original, sculpted in 1971 as an exact replica of the groovy owner of a leather shop in Mayfield, New York. 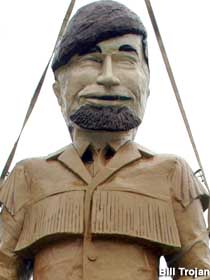 Now he’s back, standing only a quarter-mile from his previous spot. And he’s had plastic (well, fiberglass) surgery to remake him into a hipster Daniel Boone!

Leather Guy was bought by neighbor Marty Greco back in 2006. Marty wanted to turn the fringed giant into a big Boone to advertise his business selling log homes. “Then the housing market took a crash and I struggled for a while,” Marty told us. Leather Guy lay prone for years. Then Marty got a second job selling potato chips and finally saved enough cash. “And the day we put him back up, I had a call within two hours on a log home,” Marty said. “And we’ve got three other calls since.”

Call it the Beatnik Boone Bounce. 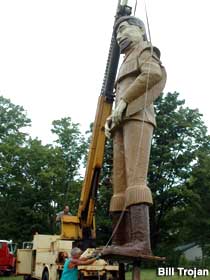 Marty said that the statue is 24 feet tall and weighs 975 pounds — or maybe slightly less, now that Marty has removed its moustache, sideburns, and glasses. “I had to cut ’em off with a saw,” Marty said of the muttonchops. “And all those little ripples in the moustache? That was a blue putty. I had to grind that down.”

And what about those awesome black spectacles?  The guy who helped Marty erect the statue (and who Marty said was the son of the man who erected the original statue) playfully mounted them on the hood of his truck. But Marty got the glasses back and has now permanently wired them to one of Boone’s hands. “It’s an inside joke,” Marty said, “for the people who saw him before.”

More on The Leather Guy