If you’ve found Parts 1 and 2 of this series illuminating, then you are ready to behold Roadside’s top sights that “Fluoresce to Impress”! 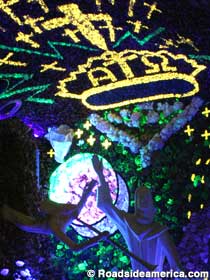 The Our Lady of Mount Carmel Monastery in Munster, Indiana is a peaceful shrine set upon bucolic grounds. But if you enter the three-story Grotto of the Holy Mother (made of 250 tons of sponge rock) and head for the Memorial Chapel (also known by us as “Ultraviolet Apocalypse“) you will be rewarded in one narrow hall with a showy and glowy 3-D religious vision made awe-inspiring by black light: a purplish Jesus raises the dead as Gabriel blows his horn, and golden crosses fill the sky (or, more accurately, the ceiling). It’s like Vegas without the vice. Other rooms in the grotto also use black light for revelatory purposes: there are hidden glow-in-the dark messages (such as “Hail Holy Queen”) embedded in the walls. It’s a miracle that this place isn’t overrun with devotees on a Pink Floyd pilgrimage.

The Velveteria (America’s best and brightest museum of black velvet paintings) is currently in transit, as co-owners Carl Baldwin and Caren Anderson shuttered their gaudy gallery in January of 2010, planning to relocate from Portland, Oregon to Southern California. 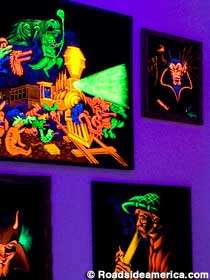 A centerpiece of oddball Portland culture since 2005, one of the highlights of the fuzz-filled funhouse was the black light room, where visitors could gaze upon a garish array of radiant visions: devils, unicorns, clowns, nude ladies, and of course (of course?) the beaming face of Alfred E. Newman.

For updates on the status of their collection of 3,000+ brush-stroked beauties, check out their website. And while you await a glittery reopening, thumb through their fine hard cover book, Black Velvet Masterpieces (Chronicle Books).

America’s most bizarre good-to-glow masterwork is located within the grounds of the popular tourist destination of Rock City (at Lookout Mountain, Georgia). Financed by mini-golf innovator Garnet Carter and designed by his wife, Freida, half-a-million visitors a year traipse along Rock City’s gnome-infested trails, cross the Swing-a-Long Bridge, and pass under a 1,000-ton balancing rock to arrive at and enter a twisted and feverish fantasy called Fairyland Caverns. 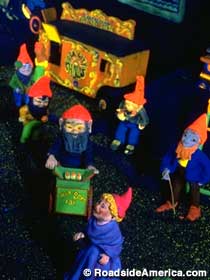 Set into the walls of Fairyland Caverns are colorful painted figures cavorting in disturbing dioramas that depict scenes from classic kids lit. The black light effects only add to the atmosphere of creepy cuteness. And just when you think you’ve overdosed on hallucinogenic adorableness, you arrive at Mother Goose Village, where dozen of nursery rhymes intertwine in one vast high-as-a-kite tableau of beddie bye confusion.

Who knows how many nightmares have been inspired by Freida’s feverish visions?
[Post by Anne D. Bernstein]