According to the LA Times, “crowds virtually stampeded” the June 24 debut of Michael Heizer’s “Levitated Mass” at the Los Angeles County Museum of Art. “Mass” is a 340-ton boulder, and its impressive title suggests that at least some of the crowd expected to see it floating in air, an amazing illusion aided by the mysteries of art. 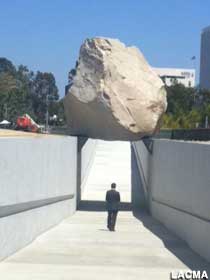 In fact, “Levitated Mass” can more accurately be titled “Big Rock Straddling Concrete Trench.” There’s a thrill in being able to walk under a big rock, especially in a rock-deprived California megalopolis. But it’s also likely that “Levitated Mass” wasn’t exactly what all of the stampeding masses had expected.

Triggering a “Stop the car!” fever pitch is an art of tourist attractions, sometimes dismissed as kitschy by those who visit places like the Los Angeles County Museum of Art. But just getting people to stop isn’t enough. You have to leave them satisfied, even if what you’re selling, whether it’s a Levitated Mass or a Man Killing Clam, isn’t quite as amazing as its name suggests.

The Los Angeles County Museum of Art had this back-end covered, too. According to the LA Times, the museum director himself cut the ribbon to the trench with a pair of “gold-handled scissors” (comically oversized?), and the “famously reclusive” artist stood at the trench exit, shaking hands and signing tickets.

Levitated Mass is a permanent addition to the Los Angeles County Museum of Art. Visit any time — but you can also be bouldered-over by other, less-hyped levitated masses at places such as Bluff Dwellers Cavern and Rock City.