It’s a tale of survival and resurrection. Of inspiration and beauty. Of teenagers discovering what awesomeness really means, perhaps with the help of a certain sweet-smelling herb. It is the story of the rebirth of…Laserium! 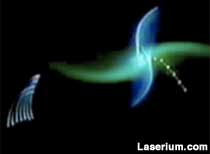 Yes, that staple of coming-of-age psychedelia has found a permanent home in the heart of Hollywood; Laserium CyberTheater has opened at The Vine Theater. The semi-star-studded launch was celebrated on June 25th–Marla Maples and David Faustino were some of the “big” names on hand. Now a new generation will have their minds blown by colorful geometric shapes floating in space. Classic Laserium shows have been revived, featuring the music of The Beatles, Led Zeppelin, and the ultimate soundtrack for deeply immersive visual/aural integration and hypnotic tranciness…Pink Floyd’s Dark Side of the Moon!

The venue will also present parties, live bands, and “lightdancing” shows where crowd boogying sets off various visual effects (This development is in direct opposition to everything laser light shows of the 70s stood for. Interaction? The whole point was passivity and a mesmerized, zen-like stillness that led to limbs falling asleep, if not actual sleep).

Of course, flashbacky laser light shows have never entirely gone away. They remain on the program at many science museums across the land, from the Museum of Science, Boston to the Miami Science Museum (with its 90s nostalgia Radiohead show) to Seattle’s Laser Dome (featuring the most up-to-date incarnations including Laser Dirge set to the music of Tool and Laser Daft Punk).

Sadly, the original Hayden Planetarium at The American Museum of Natural History–site of my young and impressionable laser light experiences–was torn down. The folks who run the rebuilt Hayden Planetarium at the Rose Center for Earth and Space want nothing to do with laser light shows. All pumped up about their fancy supercomputer they now opt for the laser-deficient “SonicVision” which has been described as “35 minutes of soaring, churning and immersive visualizations set to a thumping score of techno-electronica and contemporary rock mixed by the recording artist Moby.”

Despite obsolete technology and stoner associations, the laser light show is here to stay. And not just in domes and old movie theaters. Outdoor extravaganzas are popular, including those at the Grand Coulee Dam in Washington State and Stone Mountain Park in Atlanta, Georgia. 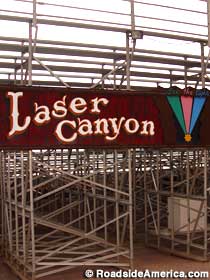 But on the top of my must-see laser list is the western-themed “Sunset Stampede” at Mystic Falls Park (“a 25,000-square-foot live forest within an atrium”) which is an attraction at Sam’s Town casino-hotel-mall-entertainment-complex in Las Vegas, Nevada.

“The eight-minute show begins with the plaintive howl of an animatronic wolf, which suddenly appears at the top of the mountain. The wolf is joined by other wildlife, including a bear and an eagle. The fountains come alive, shooting up to eight stories high and dancing along to a symphonic score recorded especially for Sam’s Town by the Indianapolis Philharmonic Orchestra.”