Lincoln Linked To Billy The Kid: A Nation Stunned

Just when you thought you’d heard everything possible about Lincoln, a small Indiana museum drops a bombshell like this.

Honest Abe and outlaw Billy?  How could they possibly be connected? 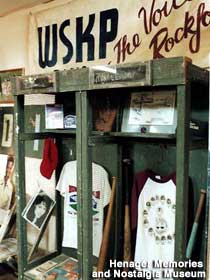 “We don’t give that out,” said James Henager, owner of the Henager Memories and Nostalgia Museum in Buckskin, Indiana.  “The only way to find out is to come and visit.”

The linkage of Lincoln and the Kid is the latest effort by James Henager to lure tourists to his attraction, whose limited attendance led us to name it The Loneliest Museum in America.  Lincoln-Billy is part of a much larger exhibit of 300 Lincoln-related items, which, according to James, has been called “the most unique project for the entire country” by the Lincoln bicentennial commission.

Notoriety as The Loneliest Museum in America “has really helped the attendance,” said James.  “If it wasn’t for that, we might be dead now.”  Still, James estimates that his museum draws only a couple of hundred tourists a year, although he had a busload of visitors when we talked with him.

(There may, in fact, be other, even lonelier museums out there, but James now regards his title with pride. “We will always be the loneliest museum in America,” he said, confidently.)

James is also busy planning the National Veterans Memorial that he wants to build.  This will require a structure big enough to display the names of 43 million people, the number that James says have served in America’s military since the Revolution.  “I talked to our congressman, and said if we could get some of this government stimulus money we could put a lot of local people back to work.”  James has also begun a “Dollar Blitz Campaign” in which he’s asking everyone in the U.S. to send him a dollar so that he can build the giant building.

The Henager Museum now shows classic films (“Our sponsors are so large it will be 208 years before we repeat a movie.”), and it has a t-shirt, and it will soon, finally, have a brochure paid for by Gibson County — identifying it as “The Loneliest Museum in America.”

As for Abe and Billy: we can’t reveal the linkage, but it’s very much in character with the arcane nature of this museum.

“When y’all named us the loneliest museum in America, you didn’t realize we would do stuff this weird, did you,” James said.  “Any exhibit we do, we don’t want to be normal.”

Sections: Places Comments Off on Lincoln Linked To Billy The Kid: A Nation Stunned