Conn, by his own reckoning, is one of the top Social Security disability lawyers in the country. He commissioned a self-promotional music video to convince the Obama administration to appoint him to its Social Security Advisory Board (it hasn’t worked). He made a huge inflatable version of himself for the Kentucky State Fair, then moved it atop a trailer on the lawn of his law office in tiny Stanville, Kentucky. 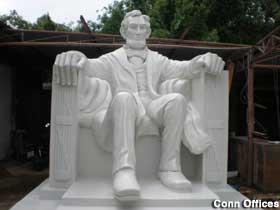 A man with such zest for marketing may never have entirely pure intentions — but he’s announced that he’s giving Kentucky the second largest seated Lincoln statue in the world.

Conn reportedly paid more than a half-million dollars to have the statue built in China. When it arrives in October, it will not be placed in some busy tourist-visited Kentucky city, but on the lawn of Eric C. Conn’s law office in Stanville. It will be unveiled on November 4, 2010, which Conn says is the 150th anniversary of Lincoln’s election to the Presidency.

Why Lincoln? Well, he was a lawyer, just like Eric C. Conn. And Lincoln was from Kentucky, which Conn feels has been short-changed (aside from Abe’s lavish birthplace shrine) when it comes to Lincoln landmarks. “And he really likes statues,” said Jamie Slone, his PR director.

According to Jamie, the statue weighs over a ton, not counting its cement base that is 16 feet square and six feet high. Unlike the inflatable Eric C. Conn on the trailer, the Lincoln statue will be a permanent addition to Stanville, with its own lightning rods, nighttime illumination, and surveillance cameras. It’s been proportioned to be just smaller than the seated Lincoln in Washington, DC, out of respect for The Great Emancipator (Conn could have made it bigger).

“He wanted to give Kentucky something to be proud of,” said Jamie of her boss.

2968 KY-114, Prestonsburg, KY
Directions:
Middle Creek National Battlefield. On the south side of KY-114, two miles west of its intersection with US-23. Clearly visible from the highway.
RA Rates:
Worth a Detour

One Response to “Big Lincoln, Courtesy of Mr. Social Security”