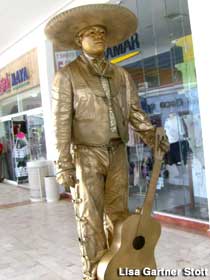 Wherever and whenever large flocks of tourists congregate in urban settings you are also likely to find those popular purveyors of motionless entertainment known as “living statues.” An offshoot of the much maligned mime profession, living statues use custom costuming and a generous helping of body paint to create the illusion of sublime inertness.

The best of the bunch can remain in a zen-like state for seemingly impossible lengths of time, an oasis of calm amidst crowds of snap-happy visitors. They train themselves to hold eerily still, despite a running commentary made up of such ear-splitting shrieks as “That’s a person!!!” or “Omigod, it’s breathing!!!”

The lazier ones just slap on a Statue of Liberty mask and are done with it, not afraid to aggressively shake down visitors for cash money tips. You don’t want to mess with a half-assed gladiator, now do you?

Many stone-faced performers have their own websites and are available for corporate events and parties. The Living Statues, Livingstatues, and Don McLeod’s Living Statues are just a few with similarly straightforward names. There are also specialized troupes like Calmer Karma’s Bollywood-themed posers or Wild West Parties’ frozen gunslingers and dance hall gals.

Anyone who aspires to make their mark as a Master of the Immobile is advised to attend The World Statues Festival. Once a year, living statues from around the globe set themselves in motion and head for this showcase of stasis in Arnheim, The Netherlands. (Next installment: August 29 and 30th, 2009.)

Back in the States, Laguna Beach, California hosts the awe-and-wow-inspiring “Pageant of the Masters” each summer (performed nightly from July 8-August 31, 2009). This is a 90-minute outdoor extravaganza where local volunteers (kids, too!) pose as famous works of art within a series of elaborate sets, accompanied by a professional orchestra.

Some of us would like to participate in the Living Statue phenomenon, but wish to avoid metallic make-up application and time-consuming prep. Luckily, there are two rather arty posing propositions going on right now. Yes, you can simultaneously be a living statue and “just be yourself.” Antony Gormley’s One and the Other project is taking place in London, where for 200 days, 24 hours a day, an endless stream of Brits will occupy the Fourth Plinth in Trafalgar Square in London. “They will become an image of themselves, and a representation of the whole of humanity” (A plinth is the platform upon which a statue rests — and also a great Scrabble word!).

And if your feet hurt, you might qualify as a participant in artist Chu Yun’s “This is Lacy” performance piece, currently installed at the New Museum in Manhattan. He’s hired a series of women to take a snooze on a platform as bemused museum-goers mill about. The performers ignore any and all pretentious commentary with the help of a sleeping pill. [Post by Anne D. Bernstein]