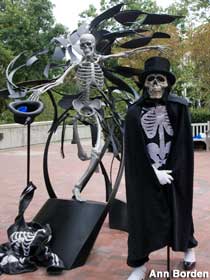 It’s always encouraging to see college students get their act together and permanently enshrine their oddball mascots, whether they be a bronze turtle or a lumberjack Muffler Man.

But Lord Dooley, at Atlanta’s Emory University, is not your typical mascot — and neither is a statue depicting him.

Dooley, “the Lord of Misrule,” is a skeleton that embodies “the spirit of Emory.” Until now he’s been represented by a student who roams the campus wearing a top hat, a black sheet painted with bones, and a skull mask. But on Homecoming Weekend 2008, the university unveiled an $80,000 statue of Dooley. He is shown apparently descending from the sky, casting aside his skeleton suit to reveal that he really is a skeleton.

The campus newspaper Emory Wheel has devoted a lot of space to Dooley since his unveiling. Although the artist (and the statue committee) praised the sculpture for its “spirit” and “bravado” and “grace,” a lot of other folks at Emory apparently don’t like it. The paper itself branded the new Dooley “gloomy” and “ghoulish” and “a grisly reminder of mortality,” as opposed to “the lighthearted figure on campus… who dances” in the skeleton suit.

Now the Dooley skeleton is undergoing hazing rituals, recently covered in mud by unknown assailants. “I thought it was an improvement,” writes an Emory blogger. “No one is in love with the new statue.” Only time will tell, but Lord Dooley’s outstretched top hat seems to be designed to encourage rude fecal pranks.

Immortal public art often takes time to be accepted. The same will likely be true for Lord Dooley. After all, what sophomore wouldn’t like to boast, “I go to the college with the skeleton statue”? Dooley is proof that college is still a place where ideas can flow and shape freely, even if the end result is a scary skeleton that reminds people that they will die. And when the cultural pendulum eventually swings, and campuses again resemble a 1970s Grateful Dead concert, Emory students will say that they have the most freakin’ awesome mascot ever.

And they will be right.

Asbury Circle, Atlanta, GA
Directions:
On the campus of Emory University. I-20 exit 60 onto Moreland Ave. N. Drive north about three miles. Moreland will change to Briarcliff Rd once it crosses Ponce de Leon Ave. Continue straight on Briarcliff about two miles to North Decatur Rd. Turn right and follow North Decatur one mile to the Oxford Rd intersection. Make a sharp left onto Oxford, then in one-quarter mile turn right at Dickey/Pierce Drive onto the campus. Follow Dickey/Pierce a quarter-mile, through one small traffic circle. At the next circle, the statue will be on the right.
RA Rates:
Worth a Detour

One Response to “Lord Dooley Mascot Statue No Boner”