As a result of the United States’ extreme lack of winning, Britain got to keep Canada. And now a big sculpture has been unveiled in Canada to remind everyone of that fact. 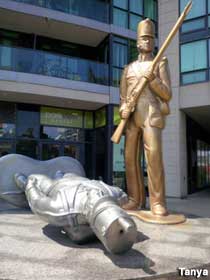 The sculpture depicts two giant toy soldiers. The British soldier, in gold, stands over a toppled American soldier in silver. An article in Canada’s National Post reports that a crowd of Canadians “laughed out loud” as the statue was unveiled in Toronto, Ontario. The article then spends much of its time gently apologizing for any bruised egos that the new statue might cause, which is a very polite, Canadian way to approach it. No hard feelings about losing that war there, eh?

It’s not like the U.S. doesn’t acknowledge its failure, sort of, with its obscure Loser’s Day Parade. But Canada is right. The U.S. really would rather not remember the War of 1812.

At least the States got one of their ships.