Lucy In The Sky With Damage 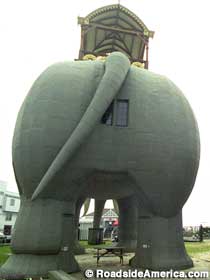 Lucy The Margate Elephant, that great, grey, wide-window-eyed wonder of the Jersey shore, suffered serious injury this fall when strong September winds lifted a party tent up off its moorings and into the air and smashed it against Lucy’s pachyderm posterior. 86 tin panels were broken and now Lucy’s tail is being temporarily held in place by metal scaffolding and an oversized wooden splint.

Lucy’s repair bill is estimated to be about $45,000. Her insurance policy with Lloyd’s of London (which we’re sure is one of the more entertaining insurance policies around) had a $25,000 wind deductible, leaving a $20,000 tab needed to restore her rear end. Fundraising efforts are underway (donate here). You can also help fill her coffers by purchasing Lucy chachkas like magnets, erasers, and temporary tattoos at her online store.

Lucy has suffered many indignities in her long life, ever since her construction back in 1881, which was financed by real estate developer James Lafferty, who hoped that views from the 65-foot-tall unforgettable elephant would help him hawk lotsa lots of land. She’s been subject to natural wear and tear from salty breezes as well as damage from a hurricane, multiple floods, a lightning strike, and the theft of her tusks by rowdy pranksters with little respect for the integrity of amusing zoomorphic architectural wonders.

At least she escaped the fate of the East Coast’s two other grand elephant buildings: The Colossal Elephant of Coney Island was destroyed by fire in 1906 (after an infamous stint as a novelty brothel); the “Light of Asia” elephant in Cape May was torn down circa 1900.

Things were looking up for Lucy in recent years, after she recieved a $20,000 paint job and celebrated her 128th birthday back in July with a carnival, Lucy-shaped cake, and 3000 well-wishing visitors. But then inclement weather left her with an extra-large RX.

Perhaps a 10-foot-tall “Get Well” card is in order? [Post by Anne D. Bernstein]

Sections: Attraction News Comments Off on Lucy In The Sky With Damage

More on Lucy the Elephant