Mago: Coming To A Town Near You?

After what seemed like far longer than two months, the towering statue of Mago, earth mother goddess, has been taken down in Cottonwood, Arizona.

The statue, erected by a group from neighboring hippy-dippy Sedona, appeared suddenly along US 89 and riled up Cottonwood’s conservative citizens. Bowing to pressure, the town eventually ordered the statue’s removal, which was blocked by protestors for several days in what the local newspaper dismissed as a “peace protest charade.”

The crane came anyway, Mago’s head was pulled off, and now she’s gone.

But maybe not forever.

Two hours south, in a very different Arizona town, a towering statue of the farm couple from the painting “American Gothic” is about to arrive in Mesa. 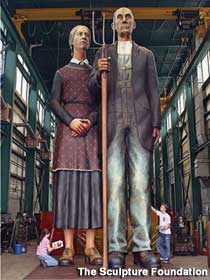 The statue is owned by a California group that’s already displayed it in Chicago, and wants to “exhibit [it] as widely as possible,” according to the East Valley Tribune, to “promote sculpture appreciation, especially in communities underserved by the arts.”

That sounds like a job for Mago as well! A visit from the earth mother goddess would be good therapy for towns that have lost their Uniroyal Giantesses, or that were denied the colossal lady that they yearned for. Come on, Arizona hippies — fire up your love truck and take Mother Mago on the road!

Sections: Attraction News Comments Off on Mago: Coming To A Town Near You?