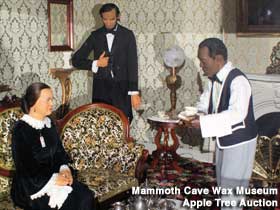 Our favorite wax museums always seem to live on borrowed time. The characters and scenes haven’t changed for decades, awkwardly frozen in a bygone era. Modern wax establishments survive by bloodlessly scrapping the old and investing in the new — the latest touchable celebrities, lighting and interactive effects. Old time wax museums hope the public still wants to gaze upon dusty likenesses of Will Rogers and Sammy Davis Jr.

Often they are wrong.

The wax ax has finally fallen on one of the classics — the Mammoth Cave Wax Museum, Cave City, KY. They’re selling off their collection of 65 historical characters and display accessories. A Newark, Ohio auction house, Apple Tree Auction Center, will conduct the sale on May 19, 2012. 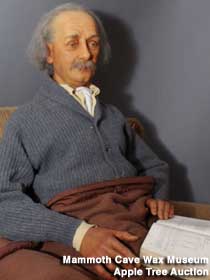 David Schnaidt, vice president and co-owner of Apple Tree Auction, was just back from Cave City when we spoke with him. He’d been documenting the museum’s figures — 17 scenes behind glass.

David said many of the figures were products of the artistry of Katherine Stubergh, a legendary wax sculptor. “Her parents started in the mannequin business in New York, and she went to San Francisco in the 1930s to open a wax art business there.” According to David, she “got hooked into Hollywood, and was almost a B-list celebrity. She knew everybody.”

That helps explain how she gained access to some unique reference material for celebrities she sculpted, taking actual life impressions of the faces of Jean Harlow, Walt Disney and Charlie Chaplin. Somehow she cornered Albert Einstein to get a mold of his face. 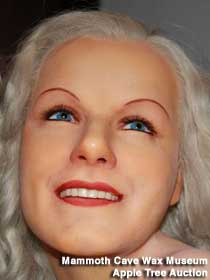 Stubergh’s meticulous technique paid off. “You can see the quality difference between her works and other wax likenesses,” Schnaidt said.

The current owners of the museum (purchased less than a year ago from the prior owner, who acquired it from the original owners) haven’t decided what will happen to the building. The figures will be auctioned, for the most part, figure by figure, with some exceptions, according to Schnaidt: “We’re not splitting up the Last Supper.”

The figures range from the Marx Brothers to Dolly Parton, Jesse James to Geronimo. The collection best catered to visitors in the 1960s and early 1970s — they would’ve found astronaut Neil Armstrong, back from the moon; but also Pope Pius XII, who died in 1958. The march of US presidents stops with Jimmy Carter. An Oval Office scene crowded with chief execs and first ladies is centered on a seated Richard Nixon next to a seated African American man in a suit. Not Obama, but give them points for trying…. 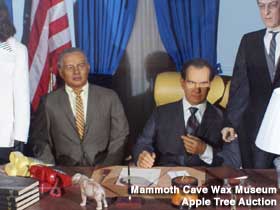 Aside from the wax figures, many accessories are on the block such as a “17th century suit of armor” that stood in the scene with Henry Ford and Thomas Edison; a 1930s Rolls Royce with a uniformed chauffeur but no engine; and three stuffed background roosters from Robert E. Lee’s 1865 surrender to US Grant at Appomattox. Lee is accompanied by his horse, Traveler.