Mark Cline, creator of Foamhenge, views April Fool’s Day as his personal holiday, one that must be celebrated each year with an elaborate prank. 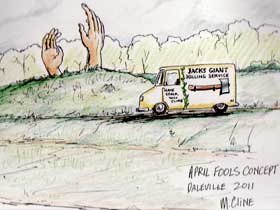 This year’s prank is in Daleville, Virginia. It involves a pair of giant hands clawing skyward from behind an earth ridge, and a truck parked nearby advertising “Jack’s Giant Killing Service.”

“I try to use what I have on hand,” said Mark, “no pun intended.” He explaining that he’d made the hands to stick into the ground in front of his Enchanted Castle Studio, “like they were building its new facade.” But he got sidetracked onto another project and the hands lay unused until Mark saw that they could be combined with an old truck and a giant ax (also laying around) into a piece of macabre fairy tale art.

Other artists have experimented with giant body parts sticking out of the ground, but not with Mark’s bloody sense of purpose. “People are gonna think it’s the resurrection of Touchdown Jesus,” he cracked.

Mark said that his April Fool’s Day pranks have become a tradition, and that he must continue to stage them (“We take our traditions seriously in the South”). The hands and truck will probably be removed on May 1, although Mark’s past pranks have sometimes been so popular that they’ve been extended for months or more….