Mascot War? We Want Angus On Our Side

Edinboro University in northwestern Pennsylvania has taken a bold step to reclaim the once proud name of “Angus” from hamburger marketing madmen. That’s because on Friday the school unveiled “Angus,” a 12-foot-tall, 25,000-pound bronze statue of a Rob Roy-era Scotsman in full kill battle mode. He’s a historic figure, not a cow or a ground beef patty. 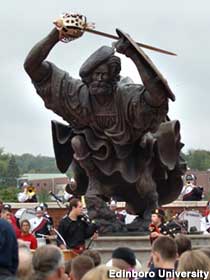 Size matters when it comes to a statue, especially when that statue symbolizes school pride. Angus may not be as magical a mascot as Lord Dooley, but he’s much, much bigger — bigger (and far heavier) even than Sparty the Spartan, the closest rival in scale that we can think of (in a fight, Angus would lop off Sparty’s head and stuff it full of haggis).

Scots are known for their thrift, but the alumni of Edinboro U. opened their bank accounts to finance Angus, at a reported cost of over $600,000. It took 13 years to build him. He faces east (toward Scotland) and he was designed and cast by former Edinboro U. students.

Amy Neil, of the University’s PR department, told us that “people were crying and gasping” when the statue was unveiled to the sound of bagpipes. She worries that students might someday climb on Angus, but from the looks of him and his seven-foot-long sword, they’d be better off sticking to gag photos peeking up his kilt.

Sections: Attraction News, Statues Comments Off on Mascot War? We Want Angus On Our Side

219 Meadville St., Edinboro, PA
Directions:
On the campus of Edinboro University. I-79 exit 166. Drive east on US 6N for 2.5 miles into town. Turn right onto Erie St./Hwy 99, then quickly turn left onto Waterford St. Drive about one mile. Turn right into the campus onto Scotland Rd. The statue will be a half mile ahead, on the right.