A presidential assassin weapon is a conundrum for the museum that possesses it, mostly because of questions of when and how it’s okay to display. 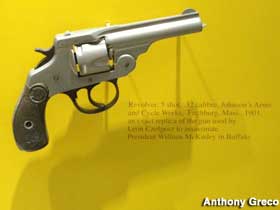 The gun that killed Lincoln, for example, is considered too historically significant to hide, so it’s a key exhibit at the Ford’s Theatre Museum in Washington, DC.

One of the guns that almost killed Ford is showcased at his Presidential Museum in Grand Rapids, Michigan — but it’s more curiosity than calamity since it didn’t hurt anyone, and Ford himself gave the approval for its exhibit.

That option wasn’t available for the Buffalo History Museum in New York, which has preserved the gun that killed President McKinley since shortly after he was assassinated in 1901.

For a long time it was kept hidden from the public out of respect for the dead, said Anthony Greco, Director of Exhibits for the Museum. That self-imposed don’t-exploit-a-tragedy exile ended years ago, but other constraints have not. 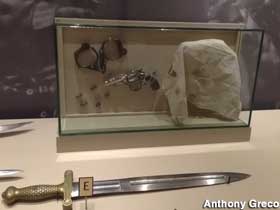 For example, the museum decided to display a replica of the gun and keep the real gun in a separate building (Anyone can see it, said Anthony, but they have to make an appointment in advance). But even the fake gun has been the target of thieves. “Our mission is to collect and preserve history,” said Anthony. “Sharing only happens when we know we can preserve what we collect.”

In other words, the real gun was too tempting a target.

The gun is brought out for special occasions. A 150th museum birthday exhibit, running from 2012-2013, has exhumed not only the gun, but the bullets, the handcuffs slapped on the assassin, and the blood-spattered tea towel he used to hide the gun in his hand (The ball and chain later worn by the assassin are displayed all the time, evidently unappealing to relic-snatchers). 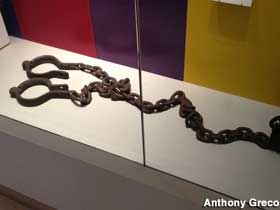 But when the celebration is over, the gun goes back in the closet. This doesn’t make anyone happy. People want to see the real gun. The museum would like to show everyone the real gun.

“One of our goals right now is to try to find a way to get it on permanent display,” said Anthony. Technology may make that possible. Moon rocks, for example, are now exhibited in bulletproof cases — or sometimes sealed inside protective pyramids — that are virtually indestructible and really, really hard to steal. There’s no catalog where you can buy such a thing, but Anthony said he was looking into having a super-secure display case built for the gun. “Enough time has passed,” he said. “It’s something that people really want to see.”

We asked Anthony about another McKinley relic that we’d read of years ago: the light bulb that hung over his head when he was shot. It reportedly was displayed in a long-gone museum in Jasper, New York. Anthony said he’d never heard that story, and the idea of a light bulb surviving in a world where a gun wasn’t safe seemed a stretch. But he agreed that it would be the Holy Grail of McKinley assassination artifacts, and he promised to let us know if he turned it up.

The Gun That Killed President McKinley