A memorial service was held this weekend at the murdered shoe tree of Middlegate, Nevada. Hundreds of people attended, some driving many hours and miles. The Lahontan Valley News reported that a prominent local Indian named Adam Fortunate Eagle (he helped other Indians occupy Alcatraz in 1970) called the tree “our fallen brother.” Fredda Stevenson, owner of the nearby Middlegate Station bar and organizer of the memorial service, said, “We don’t have any heroes. The tree was our hero.” 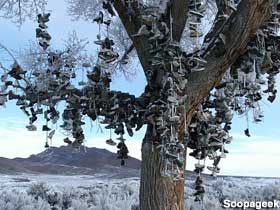 The cottonwood tree was 70 feet tall, at least 50 years old, and “sturdy,” according to reports, refuting the mistaken belief that shoes are harmful to trees. Many of the attendees were intimately familiar with the Middlegate tree, having hurled shoes into it in the past. They could be seen picking through its wreckage to find their weathered footwear.

Who would ruthlessly chainsaw such a well-loved tree? Its apparent good health suggests that its murder wasn’t done out of any love of nature. Maybe the killers didn’t like shoes? Or maybe they didn’t like the kind of people who would regard a tree as a hero?

Some news stories have reported that an art collective named “The Shoe Tree Conspiracy” want to build a replacement tree at the site. Maybe one day it will once again accept shoe offerings. And since the chainsaw-wielding morons are still out there, the new tree would be made of metal.

US Hwy 50, Middlegate, NV
Directions:
On the north side of US Hwy 50, two miles east of Middlegate.
Admission:
Free