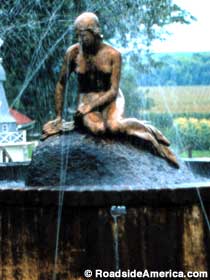 Greenville, Michigan’s Little Mermaid statue has caused nary a ripple since it was gifted to the city in 1994. The scaly sculpture is a replica of a Copenhagen landmark; Denmark’s most famous fish girl is said to attract 1.5 million visitors a year. But last May Greenville’s coy copy attracted a “copyright complaint” from the estate of Edvard Ericksen, the original statue’s creator. Heirs demanded $3,800 for “licensing rights”, leaving Greenville officials torn about whether or not to shell out (Kimballton, Iowa, another town that had wrapped its civic identity around the damp damsel, publicly worried that they’d be noticed next…).

The Greenville version — said to be about half the size and a bit bustier than the original — remained placidly bolted to a rock throughout the ordeal.

And now the bronze beauty is off the hook; the dastardly Danes have dropped their claim, possibly in response to the tide of negative publicity engendered by this Wall Street Journal article. Hooray for semi-ichthyologic icons! (If you wish to celebrate, visit Greenville’s Danish Festival from August 20-23, 2009.)

But take our advice: to avoid legal wrangling of a reproductive nature, always be sure to rip off a long, long dead artist whose work is undeniably in the public domain. Someone like Michelangelo, for example.

We can hardly keep track of all our nation’s numerous Pietas! There’s one at Christ Methodist Church in Salt Lake City, Utah (“made of the same type of marble used in the original”). A 700-pound full-size fiberglass fabrication landed at St. Mary’s Parish in Spring Lake, Michigan. Cathedral Basilica Saint Louis has a bronze casting, on loan from “Legacy Sculptures and Renaissance Sculptures, LLC.” 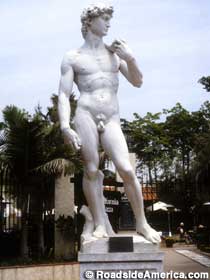 Then there are the dozens of Davids. A select few: outside the Ripley’s Believe It Or Not! in St. Augustine, Florida; overlooking the Scajaquada Expressway in Buffalo, New York; and a “precise bronze replica” at Forest Lawn Cemetery’s memorable memorial park in Cypress, California. Not to mention the example at Caesar’s Palace casino in Las Vegas, Nevada (they also have a Venus De Milo). Athough being stoic and still, they can hardly compete with the animatronic statuary over at the Fall of Atlantis Fountain Show. Those figures “come to life” and star in their own production; the free performance takes place in front of the Cheesecake Factory in the nearby Forum Shops. [Post by Anne D. Bernstein]

Sections: Attraction News, Statues Comments Off on Mermaid To Order