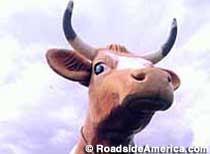 Be wary if a PR firm wants to give your big bovine a makeover. That’s the lesson learned by Janesville, Wisconsin, whose longtime icon Bessie the Cow recently had a large Spanish mantilla plopped on her head.

The idea was to draw attention to a taco stand that was opening next to Bessie. But some residents of Janesville had apparently never seen a black, lacey mantilla — a traditional Spanish woman’s headpiece — or at least not one that big on a cow’s head. Some people thought that Bessie was in mourning. Others thought that she had been vandalized by punk kids.

“In retrospect,” according to a PR person interviewed by the Janesville Gazette, “it should have been a sombrero.” Duh.

Of course in the world of PR strategy, this headwear fiasco is ultimately a success, as news outlets milk the story for its dopey “lighter side.” If they’d started with a sombrero, we might be the only ones covering it (and maybe not even us).

But that tactic is short-lived. We’re just driving too fast to process nuance in our roadside titans. If you’re going to dress up something 20 feet tall, forget subtle. Give the neighborhood goliath a whole new outfit, or just go completely insane.