« Museum of The Weird – Closing, Or Not | Main | Makeover For Minnesota’s Killer Wolf »

Miami wants to develop a downtown arts district, but it has a problem: there’s an ugly sewage pumping station in the middle of it, and it’s too expensive to move. So the city announced a design contest to make the sewage station artistic. 143 proposals were submitted, most of them attempts to gussy up the sewage pumping process. 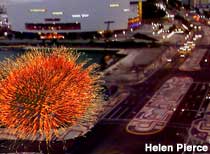 The winner took a different approach, and was a “bold and unanimous choice of a prominent jury,” according to the Miami Herald. Named “Pulse” — which also happens to be the name of the local art fair — its goal is simply to cover the station with a huge orange rubber spiky wavy thing, lit with diodes at the tips. “Like some bio-luminescent sea creature that washed ashore during a hurricane and decided to settle and join in some fun,” according to its proposal. You could just pick it up if you were a 200-ft tall giant. And then die from the poison in its stingers.

Miami’s sewer officials “aren’t promising anything,” according to the Herald, and there’s a good chance that Pulse, as wonderful as it is, will end up as flotsam in a bureaucratic sea. That would be a loss, not only for a city that needs less dour tourist attractions, but for a chance to reform the grim reputation of large blobs.