Missouri’s Dogged Love Of A Dog

Lewis and Clark, continental explorers, were big news during their extended 2003-2006 bicentennial (we stumbled across tributes to them in dozens of city parks and museums). It got so crazy, we thought, that North Dakota even erected a twice-life-size statue of “Seaman,” their dog.

Lewis and Clark have since faded from public view — they’ll be back next century — but their dog has had more of a lasting impact. 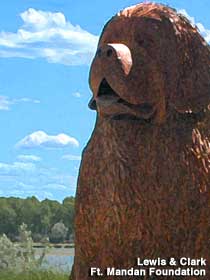 According to an article in the Columbia Missourian, a state legislator recently submitted a bill that would have declared Seaman to be Missouri’s official historical dog. The bill was defeated, partly because no one knows if Seaman was actually ever in Missouri, and partly because his breed is Canadian. But those facts apparently didn’t dissuade Missouri’s statue builders, for the article notes that, “Missouri is home to four statues recognizing the dog, including one at the state Capitol.”

Four statues in Missouri? We didn’t even know that there was one… (and we’re supposed to know such things).

A rival legislator recommended that Missouri select Old Drum as Missouri’s official historical dog. That’s a better choice than Seaman, but Old Drum only became historical after he was dead. Why not ennoble a dog that actually made history? We would recommend Jim The Wonder Dog, who was not only historical but was trans-historical as well, since he could predict the future.

Sections: Rants Comments Off on Missouri’s Dogged Love Of A Dog