No one sets out in life to love a wall. Yet we bond with our Vietnam memorial wall, which has spawned several replicas. Even our Mexican border wall has devoted fans.

Predating them both, however, is an upright all-American slab that’s been out of public view for nearly 40 years — in exile, of all places, in Canada. 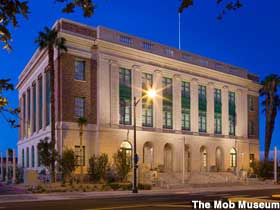 Now it’s back. The Valentine’s Day Massacre wall is the star permanent exhibit in the newly-opened Mob Museum in Las Vegas, Nevada.

Al Capone’s enforcers used the wall as a backstop when they Swiss-cheesed several members of a rival Chicago gang with bullets on February 14, 1929. When the wall was eventually torn down, it wound up in the hands of businessman George Patey, who turned it into a urinal for his nightclub in Vancouver, British Columbia. When it closed, Patey sold off the individual bricks as collectibles.

The Mob Museum acquired the bricks from Patey’s nephew, comprising roughly three-quarters of the original wall — apparently the bricks that Patey didn’t sell — and has reassembled them as an important gangland historical object.

The museum has other notable artifacts, including the barber chair in which crime boss Albert Anastasia was gunned down in 1957. Yet its mob memorabilia collection isn’t as extensive as that of a rival Las Vegas mob attraction, the Las Vegas Mob Experience, which opened in 2011. Start of a Vegas mob museum bubble?

Both attractions have their merits, but the Valentine’s Day Massacre wall strikes us as a real prize, a true American icon. We’re glad that it’s back where the public can see it, and displayed only three blocks away from a slab of another infamous wall, the Berlin Wall, which, inspired by Patey, has been repurposed as a urinal.

More on The Mob Museum