Has a cell phone company dared Montana to eliminate its roadside attractions?

It sure sounds that way in Helena, Montana, where the legislature is considering banning the use of cell phones by drivers across the state. 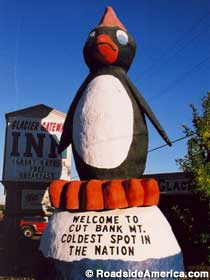 Montana has lots of empty space, and its open-ended speed limits in the late 1990s (now re-limited to 75 mph) were greatly appreciated.  There aren’t any traffic jams on the way to see Big Red The Ox or the Hobo Bible Art in a Caboose.  Still, it only takes one distracted second — even at a reduced 75 mph — to plow into a hay bale sculpture or a giant smokestack.  A cell phone ban for drivers seems reasonable, so what’s the problem?

The Great Falls Tribune quotes a cell phone lobbyist who argues that drivers may indeed be distracted by their cell phones, but they’re distracted by other things as well, such as tourist attractions.

“Perhaps,” she says, “that is something to think about before we have statewide bans on just one type of distracted driving.”

In other words — in your face, Montana legislature.  You want to eliminate drivers with cell phones?  Then get rid of the Talking Penguin Statue and the World’s Fastest Gun Memorial as well.

This kind of double-or-nothing approach may work in a casino, but you’ll never find that casino if Montana takes down its rifle-toting Muffler Man.  The cell phone company is using brinksmanship, a failed relic of the Cold War (unlike good relics such as Montana’s Radon Health Mines) — and even worse, it’s Moron Brinksmanship. What next — ban distracting cloud formations and sunsets?

It’s unworthy of a state that once let you break the sound barrier with your car.