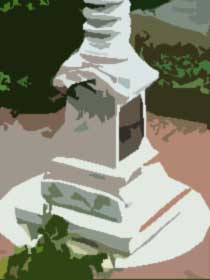 Monuments, like everything else, have a life span. The thing or purpose that’s commemorated — once thought so important that it had to be preserved forever — eventually gets forgotten. At that point the monument sometimes gets modified, or moved, or just stuck in a shed somewhere.

But never do anything to a monument until everyone who might get upset is dead.

That lesson is currently being learned the hard way by two towns: Cornwall-on-Hudson, New York, and Chatham, Massachusetts.

Cornwall-on-Hudson has a big, engraved rock dedicated to dead ex-mayor Michael Donahue, in a riverside park that now bears his name. Nearby is another big rock. The town wants to engrave the second rock to commemorate the town’s defeat of a riverside power plant. But the ex-mayor’s daughters are fighting to stop the second rock, because Donahue was in favor of the plant, and the daughters feel that the anti-plant rock would be insulting to the mayor rock.

[And there’s a disturbing aspect to monuments celebrating the absence of something… “Nuclear Waste Stored in Some Other State!” “Housing Development Not Approved!” “Smelly Paper Mill Driven Out of Business by Timeshare Neighbors!”]

Things are even less flexible in Chatham. The town simply wants to move its Pioneer Monument to a different spot on the library lawn. But the descendants of those Pioneers, who reportedly comprise most of the town’s population, are aghast. “I don’t think we need any changes or modern taste,” said one to the Milford Daily News. She called the planned move “disrespectful.”

No — disrespectful is dressing up your monument like crucified Jesus. But, then, that particular monument is one that no one has ever really liked.