It was an eventful week for the Neil Armstrong Air and Space Museum in Wapakoneta, Ohio — and not just because Monday was the 40th anniversary of Armstrong’s walk on the moon. 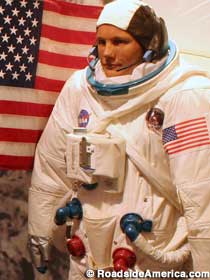 Earlier this year the museum had its budget slashed by Ohio’s governor, and only supplemental money from the state legislature kept it open through Monday. On Tuesday it was expected that it would close for good. But on Tuesday, according to the Wapakoneta Daily News, it was announced that the Ohio Historical Society would fund the museum through 2009, and “into 2010 and beyond.”

The camera-shy Armstrong declined to visit the museum on Monday, so Wapakoneta commissioned an Ohio artist to sculpt an eight-foot-tall, 1,800-pound statue of Armstrong in his moon suit out of cheddar cheese.

Unfortunately, the museum is usually closed on Mondays, so its air-conditioning automatically shut off on Sunday night. And when the staff arrived on Monday morning, they found a half-melted Moon Man.

Yet even this second potential tragedy had a happy ending. According to the Evening Leader, Sarah Kaufmann (the cheese artist) raced to the museum, covered the melted statue sections with bags of ice “to chill the sweating cheddar,” and repaired the two 400-pound slabs that had hit the floor. “Maybe it was meant to happen,” she told the Leader, since the real-time repair work “really enhanced the experience for the visitors.”