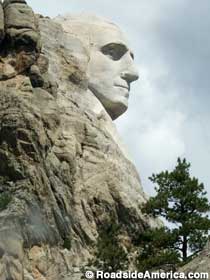 On Fourth of July weekend, All-American vacationers from coast-to-coast proudly cut out of work early so they can flock to our nation’s most treasured patriotic sights. But don’t fret if you can’t make it to a national monument; many of the most iconic and pride-inducing ones have been reproduced over and over and over (with varied degrees of success and imagination). For example, there’s Mount Rushmore. If you don’t have the wherewithal to schlep to the original, perhaps one of the following facsimiles can satisfy the urge to gaze upon massive (and not-so-massive) carved presidential faces (and the mugs of other awe-inspiring figures such as Barney Rubble).

Legoland in Carlsbad, California constructed a version out of an-impossible-to-even-think-about quantity of clever interlocking plastic bricks. This sculpture is even craggier than the original, with added features such as George Washington’s wandering eyes, and a miniature maintenance crew that cleans out his right ear with a Lego Q-Tip. 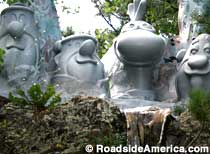 Another popular parody is the one adjacent to the parking lot at the Hollywood Wax Museum in Branson, Missouri. It stars the stony and very approximate visages of John Wayne, Marilyn Monroe, Elvis Presley, and Charlie Chaplin (though he actually looks more like Oliver Hardy). 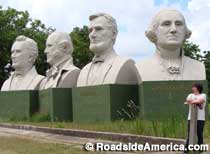 Now let’s say that you do make it to South Dakota, but traffic jams, sore butts, and the harrowing vision of endless lines and cranky crowds causes you to give up on getting to Keystone.

Do you turn around and head for home with nothing to show for your trouble? No way!

Stop at mega-tourist trap Wall Drug, which offers a miniature Mount Rushmore photo op for your convenience. Also, bathrooms. Or check out Reptile Gardens in Rapid City, where you can take a picture in front of their interpretation…and then go see a snake show or some alligator taunting. [Post by Anne D. Bernstein]

Sections: Statues Comments Off on More and More Rushmore