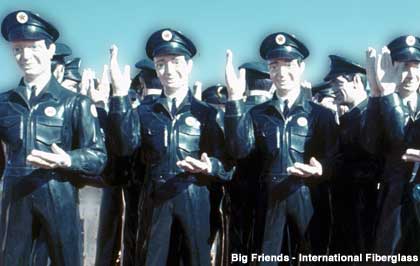 Muffler Men and their ilk have always been a wily, nomadic bunch. One minute a Bunyan is standing in front of a mountain motor lodge, the next he’s chopping wood on a beach 500 miles away. Ever wonder how these giant fiberglass statues got around — how they moved from one location to the next?

According to commercial statue pioneer Steve Dashew, it wasn’t easy. So back in 1966 he set out to solve the problem. 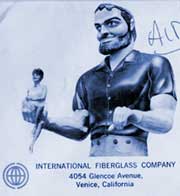 A bit of history on RoadsideAmerica.com and Steve — we’ve corresponded over the years, ever since we first connected in 1999 to discuss his role in the early days of the big brand men (what we refer to as Muffler Men) and his company, International Fiberglass. Since 1963, the company had sold large molded sculptures to oil companies (for gas stations), muffler repair shops, restaurants, and other businesses that might benefit from “3D traffic stoppers.” Based in Venice, California, International Fiberglass was responsible for creating most of the giant fiberglass humanoids standing along America’s highways.

As Muffler Men acolytes, we persuaded Steve in our discussions to thoroughly dredge his memories. He provided details on his statue manufacturing and marketing, and had few documents and mementoes from that time in his life (the company closed around 1974). But he also mentioned a patent he’d received for a novel transport trailer for giant statues, and said he might be able to find it in his files.

In those early days of researching the statue landscape, we were still in the thrall of the Great Muffler Men Conspiracy, so the trailer patent didn’t seem as mission-critical as, say, uncovering what happened to all of the Texaco Big Friends. So we forgot about the trailer. 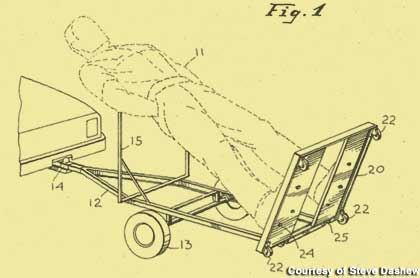 Fast forward to 2013, when Steve’s storage unit must have finally collapsed under the weight of his life of accomplishments, unearthing the patent document for his first invention, the “Tilting Trailer.” Patent #3,368,827 was filed on June 7, 1966, and issued on Feb. 13, 1968. The patent drawings and text describe how this innovation of mechanical conveyance would make travel a pleasure for any fiberglass colossus (and its human handlers).

Transportation had long been the bane of the giant roadside statue business, with issues of truck size, transport cost, load stability and safety. The Tilting Trailer could streamline the process,and make it easier for a business owner to move a big guy.

Steve had the idea, and built one to test.

The patent describes the need:

“For advertisements and display purposes, large displays are generally employed to attract the attention of potential customers. Among the displays which are used are gigantic figures, placed in a vertical position to attract attention. By using modern materials, such as fiberglass, the weight of such figures can be held down. However, due to their large size, moving such figures to where they are to be displayed is most cumbersome, often requiring a large vehicle for transporting the figures and several men for erecting the figure at the desired location.” 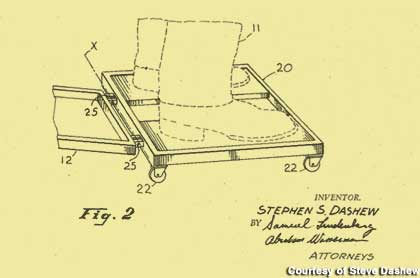 The Tilting Trailer provided a means of stable transport, attached by a trailed hitch to a vehicle. The figure could be angled down to reduce wind resistance. At the destination, the figure could again be raised vertically, and a detaching mobile platform “including a plurality of wheels or casters” would be rolled to the statue’s final location.

Steve said that many of the tilting trailers were built and deployed during the statue population explosion of the 1960s. “They were the key to the itinerant use by various oil companies, including TEXACO and the Big Friend program.”

We wonder how many examples of Patent #3,368,827 survived… Once a Muffler Man was set up, the trailer might end up behind the garage, years might pass, its original purpose forgotten….