The World’s Most Mysterious Motorcycle

Our favorite exhibit at Wheels Through Time in Maggie Valley, North Carolina, is the Traub, a one-of-a-kind motorcycle that may have dropped in from another dimension. 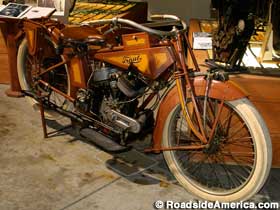 According to Matt Walksler, son of Wheels Through Time’s founder Dale Walksler, the Traub was found hidden behind a false brick wall in a Chicago apartment building in 1967. The motorcycle had clearly been placed there deliberately, but by who? And why?

Sleuthing on the part of Dale and Matt has only raised more questions. “What is a Traub? There never was a Traub,” said Matt, noting that no motorcycle or bicycle company by that name has ever existed.

The motorcycle is an even greater puzzle. The Walkslers date it to 1916, but it wasn’t built by some home hobbyist in a barn. It was precision engineered, not only to the highest standards of its time, but to standards that wouldn’t be reached for another 40 years. “We’ve got crazy amounts of technology nowadays,” said Matt, “and I can’t even fathom how I’d go about inventing my own engine.” Aside from its seat and a couple of small mechanical parts, said Matt, “there is not one part on it that you’d find anywhere else in the world.” 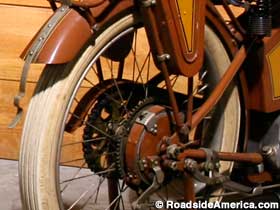 Although the Traub looks quaint by today’s standards, it can hit 90 mph. It was designed with features unheard-of in its day, such as a low center of gravity and a three-speed transmission. “This bike would’ve put Harley out of business,” said Matt. “There is nothing like this from that era, period. No other bike would have compared.”

Matt guessed that one of the Midwest’s big motorcycle companies, such as Harley or Excelsior, paid whoever built the Traub a lot of money to make it disappear. Traub apparently couldn’t bear to destroy its masterpiece, so the machine was hidden where its menacing competitors would never find it. Our guess was less practical: the inventor-from-the-future hid the Traub inside the wall to await his (or her) return — and then the time machine broke.

62 Vintage Lane, Maggie Valley, NC
Directions:
Dales Wheels Through Time Museum. On the north side of US Hwy 19, on the east end of downtown Maggie Valley. Look for the official brown highway sign. Set back from the highway; drive through the gate and across the one-lane bridge.
Hours:
Th-M 9-5 (Call to verify) Local health policies may affect hours and access.
Phone:
828-926-6266
RA Rates:
Major Fun

More on Wheels Through Time

One Response to “The World’s Most Mysterious Motorcycle”