« What’s That Up Ahead? SlotZilla and Pole-Licker Flick | Main | McKinley’s Gun: A Curatorial Conundrum » 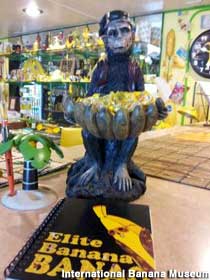 When you take over a banana museum, you’d better be ready to wear the banana suit.

Fred also owns a full-body banana suit (“I felt that the museum needed a mascot, just like Disneyland”) but he isn’t the one who wears it. “If I’m trying to attract attention,” he said, “I make my daughter put it on and go out front and start running around so people see her out on the highway.”

Going bananas over bananas came late in life to Fred. As of 2010 he was a contractor who built tennis courts, part of a family that also owned a liquor store out in the desert in Mecca, California. Then Fred’s mom read about how the entire collection of the Banana Club Museum — owned by former top banana Ken Bannister — was for sale on eBay. “I thought, hey, that would be a fun thing to do, have a banana museum,” she told us at the time. “Maybe people would want to stop just because it’s crazy.” 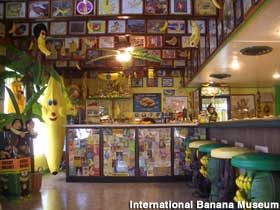 Fred liked the idea, bought the collection, and after two years of work transformed the bar next to the liquor store into the new International Banana Museum. It opened its doors in November 2012.

Fred has added 2,000 more banana items to the collection, which now numbers almost 20,000. He personally positioned all of them in the new museum: banana knives and forks, popsicles, a banana putter, kaleidoscope, telephone, banana nail polish, handbags, hair putty, band-aids. A seven-foot-tall banana with a monkey climbing it serves as a photo op. Fred scents the museum with banana nut bread candles and refreshes thirsty visitors with banana shakes, smoothies, and floats at the now-non-alcoholic bar. 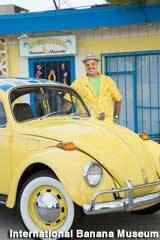 “I would love to get a wall of celebrity photos, like they used to have at the Brown Derby,” said Fred. He already has one: of Ron Jeremy holding “Platty,” the museum’s squeaky-toy banana talisman. “It was The Big Banana meets the little banana,” said Fred, delighted.

Fred and the museum are an ideal match of his enthusiasm and its location, which is just exotic and far enough away that getting to the International Banana Museum becomes an adventure. “When people come in the door their mouths fall open almost every time,” said Fred. “It looks so much different inside than outside. And I get to watch them enjoy the heck out of it.”

“There’s just something about bananas,” he said. “A museum about apples or avocados wouldn’t be as much fun.”

Directions:
Nine miles south of Mecca, on the southbound side of Hwy 111. Look for the old-style Skip's Liquor sign; the museum is in the building next to it.
Status:
Closed