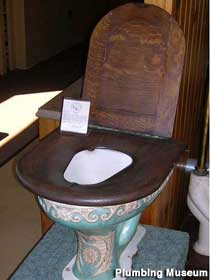 The evolution of plumbing and bathroom fixtures in America is fascinating — yet virtually unknown to most Americans. The tale of history’s toilets cries to be heard.

That thought must have crossed the mind of plumber Charles Manoog, who in the 1950s began saving some of the more memorable old bathroom fixtures that he encountered on the job.  That collection formed the core of the American Sanitary and Plumbing Museum, which Charles’s son Russell opened in Worcester, Massachusetts in the late 1970s.

But when Russell retired in 2007, he had no son willing to carry on the tradition.  “It was such a nice collection, he wanted to give it to someone who would really appreciate it,” said Tom Palange, marketing spokesman for J.C. Cannistraro, a mechanical contracting firm.  It turned out that J.C. Cannistraro had a 150-year-old ice house on its property, and that the firm’s president was also the president of the Plumbing, Heating, and Cooling Contractors of Greater Boston.  A deal was struck, and in January 2009 the American Sanitary and Plumbing Museum reopened in its new home in Watertown, Massachusetts.

“Follow the fascinating progression of plumbing through the centuries,” claims the museum’s literature. The second floor houses a library of old plumbing journals and supply catalogs, while the main floor has exhibits on water mains, septic tanks, leaching fields, and gray water — as well as Manoog’s unmatched collection of commodes, claw-foot tubs, soapstone sinks, and hot water heaters. 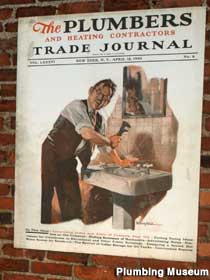 And toilets.  Tom said that the toilet exhibit begins with an unusual 19th century “indoor outhouse” and ends with a modern, motorized, self-deodorizing Japanese toilet.  There’s also an 1891 high tank water toilet — “one of the first,” according to Tom — with an elaborate blue china bowl, and an actual exposed plumbing system in front of a mural of a full-size house.

“We’ve taken it to the next level,” said Tom, proudly.

New England still has a mother lode of bathroom gold to be mined.  Tom told us that a local bowling alley has a soapstone urinal that the museum is particularly eager to get.

Directions:
I-90 exit 17 (Newton/Watertown) toward Watertown. At the junction of Galen St. and Hwy 20, turn left onto Main St./Hwy 20. Follow Main St. for a just over one mile and turn left onto Rosedale Rd. The Plumbing Museum is at the end of the street on the left, adjacent to the corporate headquarters of J.C. Cannistraro.
Hours:
Currently closed.
Status:
In Transition

More on The Plumbing Museum

2 Responses to “New England Toilet History Pops Back Up”