A 25-ton Tiki head in arid Arizona somehow seemed perfectly sensible as part of Tucson’s Magic Carpet Golf. But when the mini-golf course closed in late 2007, the head — as well as the attraction’s many other oversized sculptures — were imperiled by the same forces of change that have toppled Tikis in places that don’t even have miniature golf. 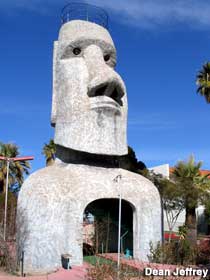 It took a year, and $20,000 from a loyal local community, but the head has a new home. Sawed off of its base on Christmas Eve, it was hauled seven miles west to a nightclub named The Hut, where it will tower over patrons in a gated outdoor patio. “We’re a liquor establishment, so people will not have unlimited access to the tiki head,” said the club owner in a story in the Tucson Citizen. The head will be still be visible from the street, as will many other Magic Carpet sculptures that are being moved to Valley of the Moon, a local folk art attraction.

The Tucson Tiki head has a close relative in Florida, and perhaps inspired this other large head in the Arizona desert.